With help, Cuba copes with AIDS

U.S. charity comes to the rescue of Havana mission 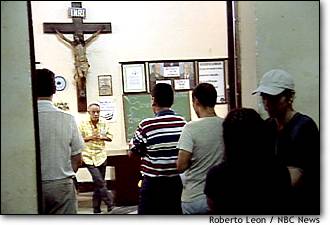 HAVANA, June 27, 2002 —  Seven years ago, a young Cuban runaway named Regino found out he had AIDS. Regino lived in Havana, broke and alone, searching for work after having left the family farm. His timing could not have been worse — Cuba’s economy was in tatters and Havana overcrowded with many others like Regino fleeing the poverty of the provinces. He ended up working Cuba’s black market, selling cigars and sex to foreign tourists.

ONE MORNING, after spending the night on a park bench, Regino felt desperate. Even though not religious, he found himself knocking at the rectory door of Havana’s Nuestra Señora de Montserrat Church. The priest who answered his knock, Father Fernando de la Vega, would be his temporary salvation until Regino’s death several years later.
“We talked for hours. Regino told me about others living alone with AIDS. Then and there, I decided to open the church to them,” de la Vega said.
Regino came back for supper with a friend, another homeless person infected with the HIV virus. The meal they shared that night was a preview of what would become the city’s first soup kitchen and community support group for people living with AIDS.
Every Thursday night since then, about 100 people gather in a makeshift dining room in the back of the church to share what for many is their only hot meal of the day.


De la Vega’s volunteers serve up rice, beans, chicken and salad at a cost of about $1 per person — a bargain price by U.S. standards but a fortune in cash-strapped Cuba, where neither the Catholic Church nor the government funds such grass-roots operations.

When asked how he has kept the soup kitchen running all these years, de la Vega answers, “with a miracle” — albeit an earthly one. Donations come mainly from the Boston Archdiocese and a tiny non-profit called the Cuba Aids Project that operates with a U.S. Treasury Department license allowing humanitarian aid to circumvent the economic embargo on the island. 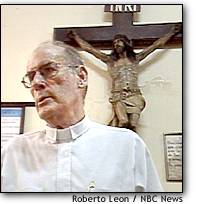 FOCUSING ON THE VULNERABLE
At Nuestra Señora de Montserrat, there is no money to spare — not to replace a collapsing roof or a ramshackle car for the parish priest.
Built in 1843, the stone church throws off an impressive shadow at dusk, but the glare of the tropical sun reveals an aged façade literally falling to pieces. The church blends in with the rest of the neighborhood, a seedy commercial zone with empty storefronts outnumbering the few businesses whose doors remain open.
De la Vega shrugs that off — focusing instead on helping the most vulnerable in his community. He is also unusual in that he refuses to convert the Thursday evening AIDS support group into a forum to proselytize. “I worry about their souls, but I worry more about their food, their housing and their state of health.”
De la Vega’s more traditional flock at first rebelled at the idea of making their church a sanctuary for people sick with the HIV virus. At the start, people simply assumed the priest must be a homosexual to welcome the AIDS community into the church.

About 70 percent of Thursday night’s participants are gay men, reflecting Cuba’s national AIDS statistics.
After that speculation died out, his parishioners still balked at sharing the church with HIV carriers. “The congregation was hysterical. They thought I was deranged. Little by little, they came around.” Regular church members now serve up the Thursday night dinners on chipped china donated by the congregation.
On a recent Thursday night, a delegation from the Cuba AIDS Project delivered several dozen care packages to de la Vega’s support group. “These are simple things but make all the difference,” said Orlando, a 26-year-old Cuban physician living with AIDS, as he opened a shopping bag containing aspirin, a toothbrush, flu medicine, appetite stimulants, calamine lotion and a bottle of vitamins.

RED-BLOODED REPUBLICAN
Since 1995, the Cuba Aids Project has shuttled tons of medicines to HIV/AIDS sufferers on the island. Several times a year small groups of average Americans travel to de la Vega’s church to hand over the aid and meet with Cuban health care providers. The only requirement stipulated by the U.S. Treasury Department license authorizing the mission: Travelers are forbidden from engaging in tourist activities during their stay.
The man heading the humanitarian effort couldn’t be a more unlikely candidate for the job: Dr. Byron Barksdale, a red-blooded Republican who traces his American ancestors to two Barksdale brothers who settled in Virginia in the mid 1700s and French Huguenots in 1650s. Francis Marion, another Barksdale ancestor, was a patriot leader in the American Revolution. Byron, a scion of a military family, proudly points to his great-grandfather who fought in the Civil War, his father who took part in World War II, and his brother once stationed at the U.S. Naval Base in Guantánamo, Cuba. There’s also a Louisiana Air Force base and a Texas Army camp named after the family.
Byron Barksdale became involved in the AIDS Project when he learned how medicine scarcities on the island were killing AIDS patients. The pathologist now living in Nebraska blames the U.S. embargo on Cuba as one factor causing the shortages.

“Cuba has a first-class AIDS surveillance system and prevention program.… Many of the AIDS treatment modalities are available. They’re producing their own anti-retroviral drugs. Their problem is cranking up the supply to satisfy the increasing need in Cuba,” he said “People with AIDS die of common infections, and they lack common anti-fungal or anti-microbial agents to combat this. They don’t have proper anti-cancer therapy to combat tumors. This is their problem — having access to the powerful weapons to control the disease.”
Barksdale is also spurred into helping Cuba by the fact that the AIDS virus respects no borders.
“Eventually the embargo will be lifted and we’ll have 1 or 2 million U.S. citizens coming down here. The last thing you want is a high prevalence of AIDS. Imagine if Cuba gets to be a hot spot during spring break. Our sons and daughters will be coming down here, contracting HIV and taking it back to the United States. You can’t cure AIDS in the U.S. but not wipe it out in Cuba. It’s just like polio. You have to eradicate it globally.”

PERILS OF THE CARIBBEAN
As of November 2001, Cuba’s rate of HIV infection was 17 times lower than the rest of Latin America, where an estimated 1.8 million adults and children are living with HIV.
According to the United Nations, the Caribbean is in danger of becoming the second most-affected region in the world. Nearly 700,000 people in the Caribbean are HIV-positive. In the Bahamas, adult HIV prevalence has risen to about 4 percent and in Haiti to nearly 6 percent.
Cuba retains the lowest AIDS rate in the Americas and one of the lowest in the world with an adult prevalence rate of 0.03 percent. Testing of all pregnant women has resulted in a zero mother-child transmission rate since 1997.

At the start of the global AIDS outbreak, Cuba succeeded in keeping down the numbers through harsh measures — running from mandatory testing to forcibly isolated HIV carriers in sanatoriums. While these institutions still exist, most patients are now free to return to their communities.
Since Cuban doctors diagnosed the first AIDS case in 1986, a total of 3,750 people have been found infected with the HIV virus. Of these, 2,923, or 78 percent, are male, and 827, or 22 percent, female.
According to Cuba’s foremost expert on AIDS, Dr. Jorge Perez, the greatest challenge to caring for his patients is securing an adequate supply of the right medicines. In 1997, soon after the anti-retroviral medicines hit the world market, Cuba could only afford to buy enough of the “cocktail” for HIV/AIDS children and the most seriously ill adults.
By the summer of 2001, Cuban chemists successfully duplicated the anti-retrovirals and began producing enough for local use to make a difference.
Previously, Perez had routinely hospitalized 90 patients a month in Havana’s sophisticated Tropical Medicine Institute. By November, that rate had been slashed to a dozen. Still, there is not enough of the medicines to go around.
Under Cuba’s socialized health care system, complete medical attention for HIV/AIDS sufferers, including the anti-retroviral treatment, is free of charge. Underscoring the emphasis on health and education, the Cuban government allocated 65 percent of its national budget this year to funding social programs.
Perez, a frequent lecturer at de la Vega’s AIDS support group, often counsels on prevention strategies. But the same economic hard times that lured people like Regino to Havana and into the sex trade, hamper the cash-starved island from importing sufficient quantities of condoms.
U.N. money this year should help ease this shortage along with a national task force that aims to integrate prevention strategies by involving educators, health care providers, government agencies and non-government organizations.