Nebraska and Cuba: Past, Present, and Future

"And gladly woulde he learne, and gladly teche." Geoffrey Chaucer, The Canterbury Tales 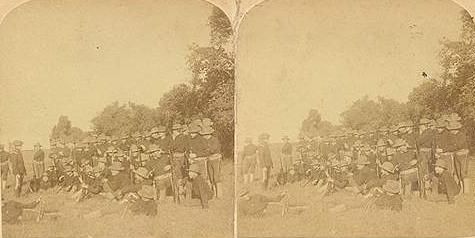 The Third Nebraska Volunteer Infantry served as part of the occupation force in Cuba following the Spanish American War. The 3rd Nebraska originally was intended to serve in Cuba as part of the 5th Corps. However, the unit served as part of General Fitzhugh Lee's Seventh Corps instead. The colonel of the regiment was William Jennings Bryan. Bryan later ran against William McKinley for Presidency of the USA..

The Third Nebraska was raised in the second call for volunteers, and was mustered into service July 13, 1898, then moved by rail to Jacksonville, Florida, July 18th, 1898. The unit arrived four days later and made camp at Panama Park, Camp Cuba Libre and become part of the First brigade, Third division, Seventh army corps. On October 24th, the unit was moved to Camp Onward in Savannah, Georgia; thence moved to Havana, Cuba from the United States on transport ship,"Obdam," on December 30th, 1898 (twenty days after the Treaty of Paris was signed, ending the war). The unit arrived in Cuba on New Years Day, 1899. The Third Nebraska served in Cuba until April 7, 1899, arriving back in the U.S. five days later.

The Third Nebraska Volunteer Infantry was mustered out of service on May 11, 1899 at Augusta, Georgia. At the time of mustering out, the unit consisted of fifty-five officers and 1,251 enlisted men. During its term of service, the unit had one officer and thirty-one enlisted men die of disease. In addition, twenty men were discharged on disability, one man was court-martialed and three men deserted.

Paul Vandervoort (1846-1902), who once lived and worked in Omaha, is perhaps best remembered for the American colony he helped found in Cuba about 1900. Populated chiefly by Union veterans of the Civil War, the colony, La Gloria, was the largest American settlement on Cuba. It survived for more than fifty years, reaching a peak population of about one thousand residents. He became assistant general manager of the Cuban Land and Steamship Company of New York. With the installation of a U.S. military government in Cuba in 1899, ship lines, such as the one that employed Vandervoort, transported prospective emigrants and investors to Cuba for a new life and new opportunities, especially in citrus farming.

Vandervoort planned much of the La Gloria colonization venture in the Cuban Land and Steamship Company's Omaha office. The settlement was founded in 1900 or 1901 (the exact date is unknown) on the north coast of the Cuban province of Camaguey on unimproved, heavily timbered land that was two days' travel by boat from the nearest town. It was intended by Vandervoort to be a new home for Union veterans looking for a fresh start.

Land had to be cleared, houses built, and gardens and orange groves planted. Vandervoort did not live to see La Gloria grow. He died in Cuba on July 9, 1902, and is buried in Omaha's Forest Lawn Cemetery.

By 1920, La Gloria had a community church and town hall, an orange growers' association, and a population of seven hundred. One former resident in 1944 recalled that as many as one thousand people had once lived there. However, a combination of natural disasters, political upheaval, and a shift in focus for agricultural production (away from citrus crops and towards sugar) marked the decline of American colonies in Cuba, and by the mid-1950s La Gloria had disappeared.

Nebraska's U.S. Senator Charles ("Chuck") Hagel, R-NE., was the lead sponsor of a bill in the U.S. Senate for several years prior to 2000 to permit food and medical sales to countries, such as Cuba, to help Nebraska farmers and ranchers expand their markets and get higher prices for their produce. President Clinton has signed the Year 2000 farm bill that allows USA food and medical sales to Cuba as long as Cuba either pays cash for the food and medicine or obtains non-USA originated loans or credits to pay for USA produced food and medicine.  Cuba does belong to the International Chamber of Commerce but does not belong to the International Monetary Fund. 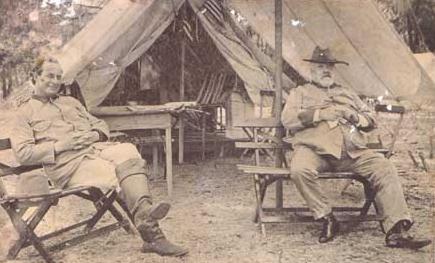 Cuba will likely be able to find money to buy from the USA if the agricultural and medical savings offsets the need for non-USA originated bank expenses.  Congress does not want USA taxpayers to foot any bills for food and medicine if Cuba defaults on these sales from USA companies. Congress also does not want these sales to directly support the political hierarchy in Cuba. 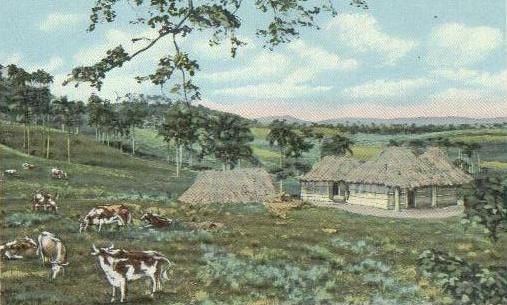 Before 1959, Cuba had historically been a good friend of the USA. In 1891, John J. Pershing was assigned as an instructor of military tactics at the University of Nebraska-Lincoln. Pershing would hold this posting until 1895. While in Nebraska, Pershing also attended law school and graduated in 1893. In addition, he formed a drill company in 1894 which won the Omaha Cup. Upon the outbreak of the Spanish-American War, First Lieutenant Pershing (now 38 years old) was offered a brevet rank and was commissioned a Major of Volunteers on August 26, 1898. He fought with distinction at Kettle and San Juan Hill in Cuba and was cited for gallantry. In 1919 he was awarded the Silver Citation Star for these actions and, in 1932, the award was upgraded to the Silver Star Medal. The 3rd Nebraska Regiment, under the command of William Jennings Bryan, was stationed in Habana in 1900. 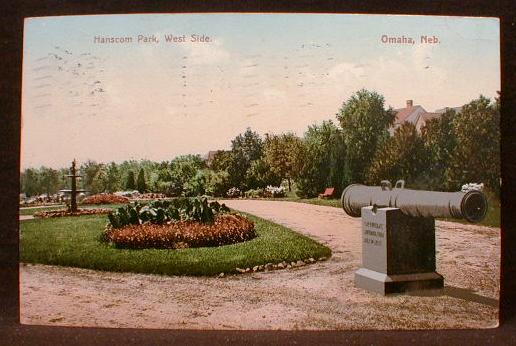 Cooperation in the medical epidemiology and control of yellow fever was spearheaded by Walter Reed and the American Yellow Fever Commission from the USA. Walter Reed was stationed in Fort Robinson Nebraska early in his military career. The Rockefeller Institute in New York developed the first vaccine for yellow fever to be used in Cuba in 1937. It developer, Max Theiller, M.D. won the 1951 Nobel Prize in Medicine. 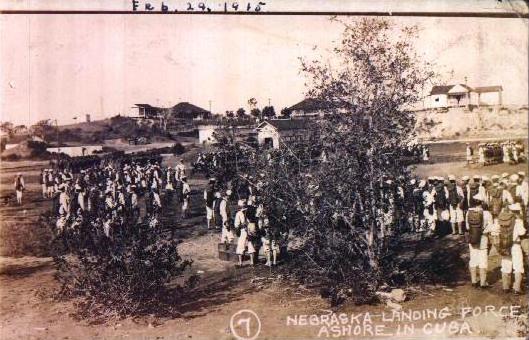 President Kennedy was very close to completely lifting the USA Embargo against Cuba in 1963.  His untimely death in Dallas prevented his Executive Order to lift the Embargo from being issued. President Clinton has signed the Year 2000 farm bill which includes a partial lifting of the Embargo against Cuba effecting the intent of President Kennedy to not punish the Cuban people by denying them USA food and medicine. Governor Dave Heineman and U.S. Senator Ben Nelson (D, NE) led a group of Nebraskans to Cuba in June, 2005. Since these visits, Cuba has purchased millions of dollars of agricultural items from Nebraskans through January 2009. 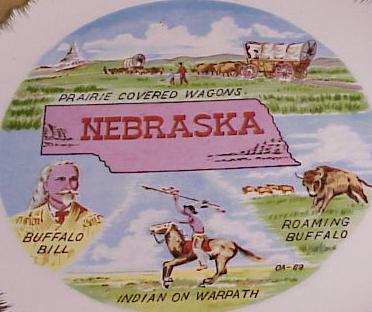 A little background about Cuba: The population of Cuba is 11,000,000 with 97% literacy. Spanish is the primary language and English is rapidly becoming the second language of Cubans (Russian is no longer taught in Cuba schools...it has been replaced by English).  Cuba is an island just 90 miles from Key West, Florida. On the North coast of Cuba is the Atlantic Ocean, on the Northwest coast is the Gulf of Mexico and the Southern coast is bathed by the Caribbean Sea. 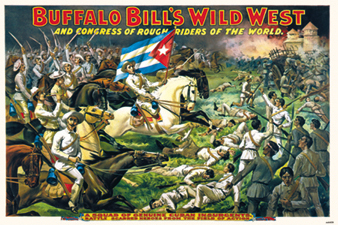 Cuba has a land area about the size of Pennsylvania.  It lies just below the Tropic of Cancer.  The rainy/hurricane season is May through November each year.  The major agricultural goods produced by Cuba are sugarcane (and derivatives therefrom such as Cuban rum), tobacco (cigars), coffee and citrus.  The largest non-agricultural sources of income for Cuba are tourism and biotechnology.  The Port of New Orleans, Mobile, and Houston have geared up for increased trade with Cuba.  Customs and U.S. Immigration services at Key West, Florida have been expanded.

Cuba has a friendly feeling towards Nebraska. In August, 1999, high school students from Lincoln went to play soccer in Varadero, Cuba.  Nebraskans were chosen by Cuba to be hosted in Varadero because Cuba believes the people of Nebraska represent "middle of the road" U.S.A. thinking towards Cuba and are not prejudiced against the Cuban people as are many people in Miami, Florida. The Cuba AIDS Project has been directed by a Nebraskan since 1998. 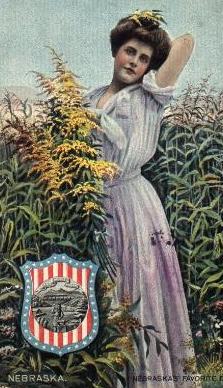 Wheat is imported from Argentina and France into Cuba today.  In the future, the major wheat exporter to Cuba should be Nebraska.  Cuba imports 950,000 tons of wheat each year. All Nebraskans are welcome to help in the humanitarian efforts of Cuba AIDS Project. 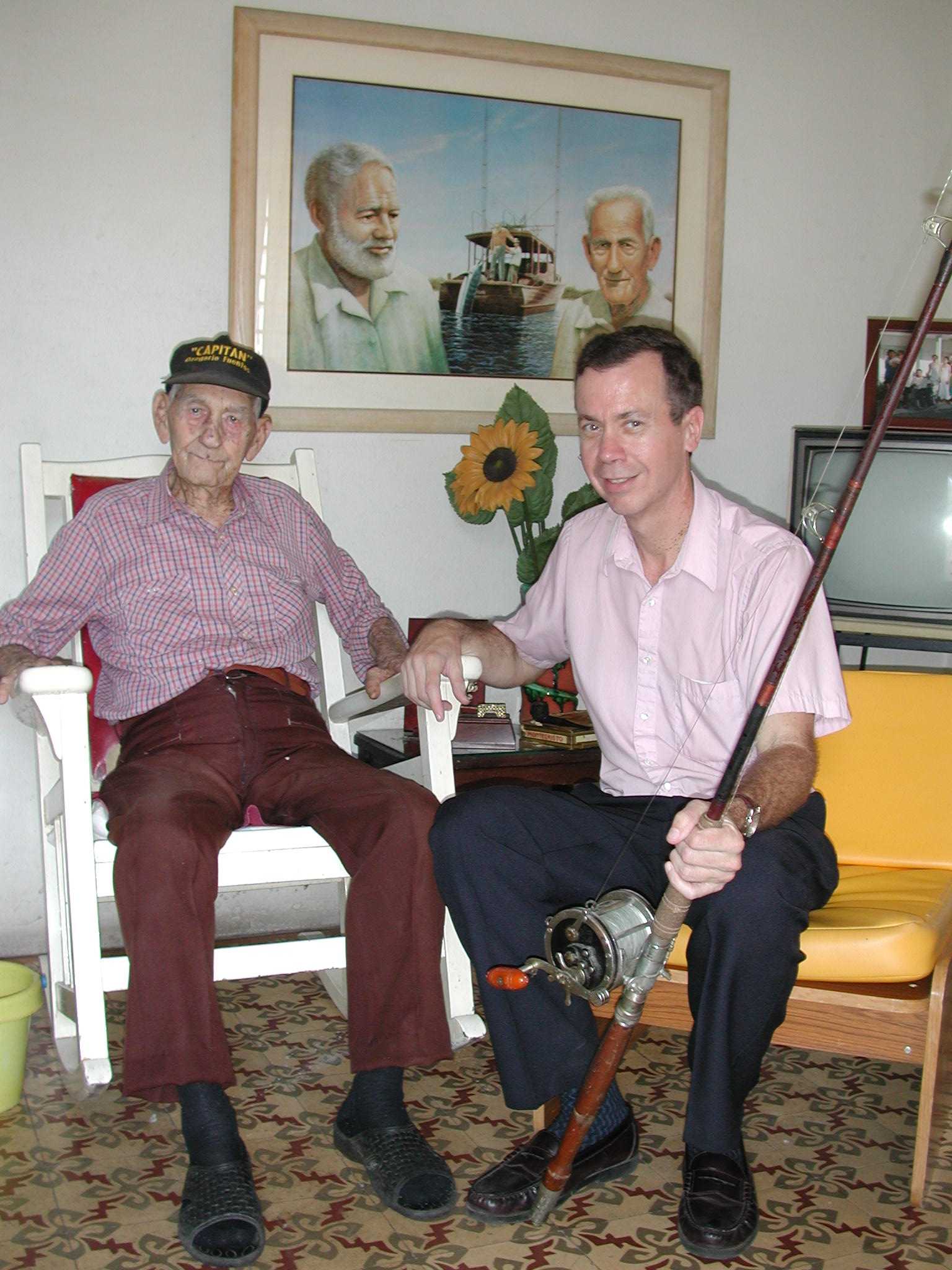 Captain Gregorio Fuentes, captain of the Pilar, and Byron L. Barksdale holding one of Hemingway's rod and reels during a visit to Cojimar 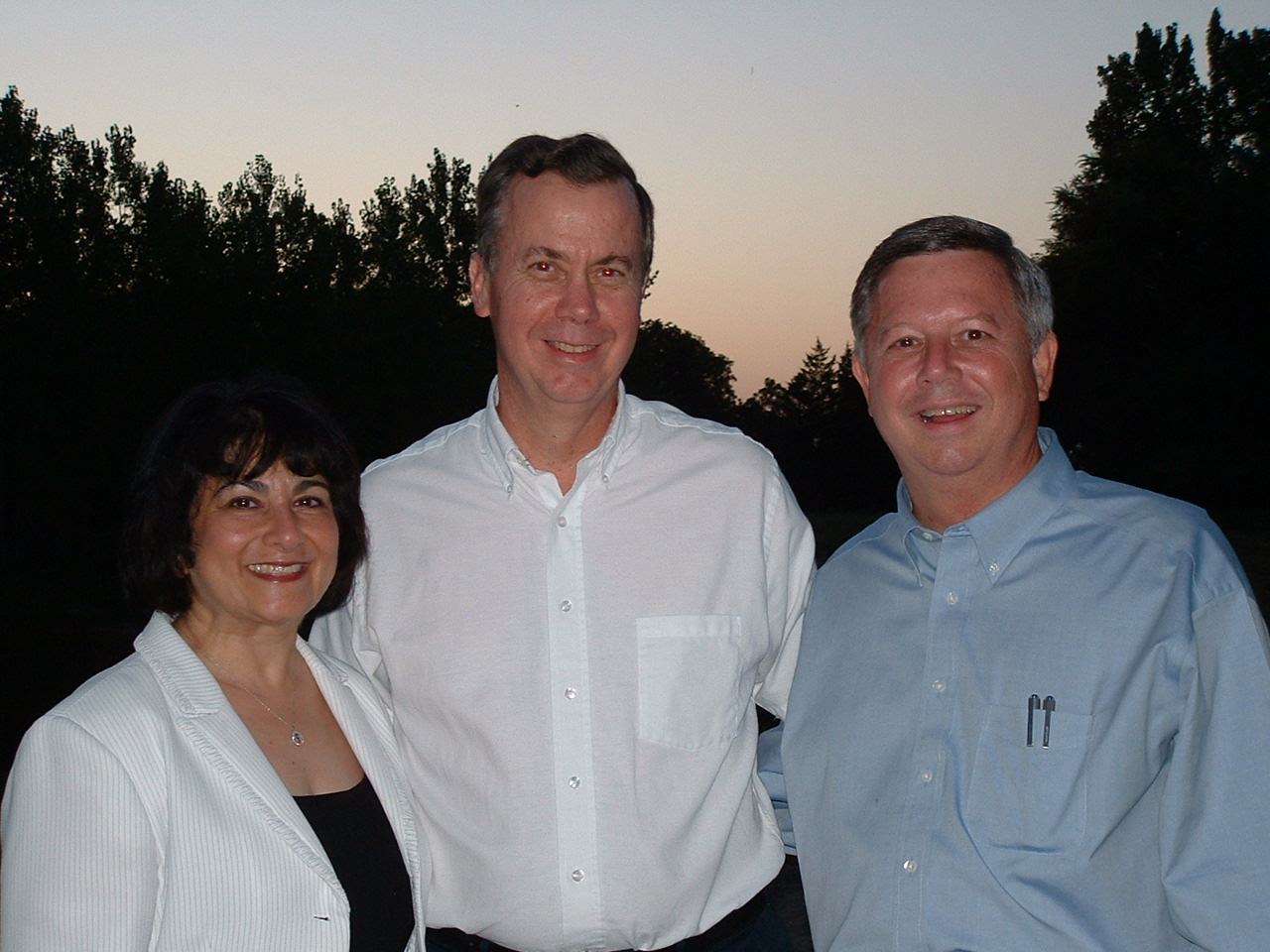 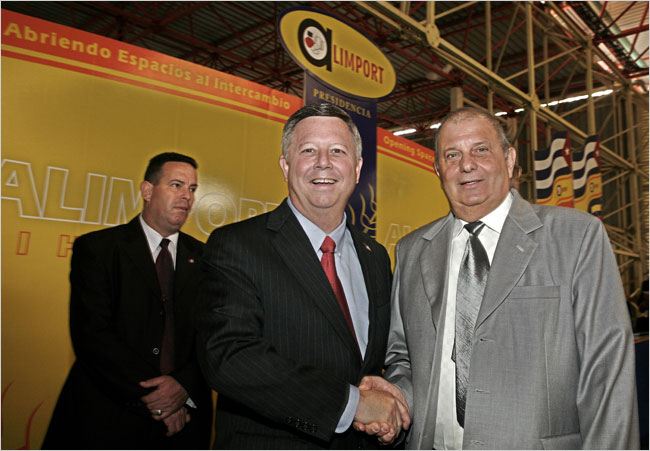 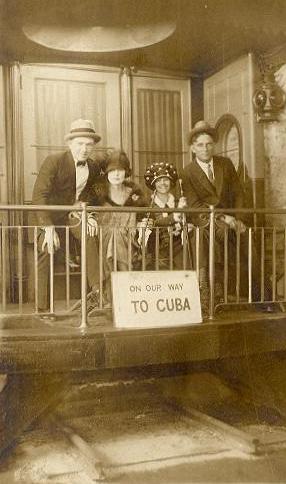