"The Great Possibilities of Telecommunications in Cuba" 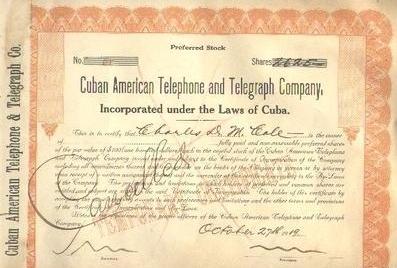 The theme of the Cuba Pavilion at the 1939 World’s Fair in New York City was “The Great Possibilities of Cuba”. As we enter the new millennium, a new theme for Cuba may be “ The Great Possibilities of Telecommunications in Cuba” if a feasible transition occurs to allow all sectors of the Cuban economy , including private individuals, to openly access and fully utilize the Internet and telecommunications in Cuba.

Traditionally, since the discovery of Cuba by Columbus in 1492, the economy of Cuba has been commodity based, principally tobacco (cigars), sugar and rum. While biotechnology and tourism have recently been designated as engines of growth for a New Cuban economy, the historical commercial exports of Cuba remain sugar, tobacco, coffee, seafood, citrus and tropical fruits. Recently, Cuba has produced a very effective vaccine against Type B Neisseria meningococcal meningitis which international pharmaceutical giants hope to produce and sell worldwide. This year, Cuba has a goal of receiving two million tourists…tourists bringing with them stories and discussions of the world beyond Cuban shores, including the world of the Internet,  the World Wide Web, global politics, news of world labor activities and the ease of global connectivity with modern telecommunications. These tourists request full internet access while in Cuba.  To meet this demand, for a hefty fee, Cuba has provided cybercafes, business centers in major tourist hotels, cell phone rentals, etc. for the tourists to pay cash (about $5.00 US for 30 minutes at Habana Libre Hotel) for Internet use and mobile telecommunications.  The broad range of information, products, and services provided by the Internet which is daily demonstrated by tourist utilization of the Internet has not gone un-noticed by workers in Cuba.

Annually, an International Network and Telecommunications Event is held in Habana under the auspices of the Centro de Diseno de Sistemas Automatizados (CEDISAC), a branch of the Ministry of Science, Technology, and Environment. These annual conferences discuss electronic commerce, new Internet technologies, utilization, security of networks, information services and feature an exhibition of modern networking products and technologies. Despite the growing awareness of the Internet among the Cuban populace, as in China, the Cuban government has temporarily limited (through cost, access restrictions, strict and severe penalties, and inadequate infrastructure), the presence of the Internet and  modern telecommunications in Cuba among private citizens.

Countering the restrictive efforts of the Cuban government is the highly educated Cuban population.  In 2009, workers in all sectors of the Cuban economy are increasingly likely to have completed high school or even a five year university education.  These educated workers see foreigners using cellular telephones, the Internet, and other media for coordinating daily activities, networking, and leaving Cuba, if only in cyberspace, for remote destinations on the World Wide Web, including USA domicilied websites.  Cuban workers and their families want whatever it takes to be a part of the global community.   Government of Cuba prohibitions and harrassment are relatively insignificant obstacles to the Internet in a population already burdened by the weakness of the Cuban economy.  In fact, many workers in Cuba view the Internet as a primary means to improve their financial net worth by privately and directly selling art, music and crafts, and contracting with tourists who intend to visit Cuba.  These growing entrepreneurial efforts by Cuban workers and private citizens, facilitated by the Internet and telecommunications, bypass Cuban legal and taxing authorities. This capitalism in action fuels an underground economy and individual prosperity because these entrepreneurs are paid in untaxed dollars directly by foreigners for their goods and services.  Young Cuban workers, like their fellow co-workers in Shanghai, want to be compensated for their goods and services at market economy rates not through the structured compensation of a socialist economy. Recurring concerns about the health of Fidel Castro, including his recent heat exhaustion and fainting drama (June 23, 2001), the age of current Cuban President Raul Castro and what will happen in Cuba when the Castro brothers die further motivates Cubans to augment and "squirrel away" their assets. Truly democratic nations and worker friendly unions should encourage Cuban worker entrepreneurial efforts since eventually they will contribute to the underpinnings of Best Business Practices needed in Cuba in the post Castro era.

As Cuba integrates into the World economy, the Cuban people are becoming more Internet and telecommunications savvy.  Ignoring a Cuban law that prohibits unauthorized private Internet use in Cuba, a growing number of new revolutionaries, known as “informaticos”, are resisting the efforts of the Government of Cuba to “keep the Cuban version of the Internet Genie in its socialist embodied lamp”. Cuban private citizens, including workers at Cuban cybercafes, tourist resorts, university personnel, etc. are increasingly logging onto Yahoo Spanish language based homepages or CNN, have user names on Yahoo or Hotmail to access email, utilize instant messaging, read foreign publications, search large internationally located databases, download music and images, etc.

Older Cuban workers remember the extensive rights accorded to workers under the 1934, 1935 and 1940 Constitutions.  The Cuban Socialist Party, in 1940, applauded these new worker rights.  These rights included the right to form independent unions, the right to strike (with notice to the Secretariat of Labor), individual or collective bargaining, freedom of assembly, freedom of speech, freedom of the press,  prohibition against forced labor, etc.  The Castro government suspended the Constitution of 1940 in 1959 and tried to address these rights in the socialist Cuban Constitution of 1992. The problem with these newer versions of workers' rights is they are secondary to socialistic dogma and dictates, adjudicated arbitrarily by socialist oriented (versus politically impartial) courts, and, as Article 62 of the 1992 Constitution states none of these workers' rights: "can be exercised against the 1992 Constitution and Cuban laws, nor against the socialist state".

For a private citizen to have full illegal internet access in Cuba, the individual must have (1) a private telephone line (which is difficult to obtain), (2) an Internet access device, usually a personal computer with a modem, and (3) dial-in capability to the Internet for a monthly fee (about $35 per month).  Private "black market" full internet access is one of the most rapidly growing areas of the underground Cuban economy.  To offset this rapid growth of  “black market accounts” or “account sharing” to uncensored information by a private citizens, the Government of Cuba is placing more computers into public schools, opening and operating “CyberCafes” (in Plaza de Armas and the Capitolio) and enabling widespread youth access to  formal and Internet faciliated computer courses and a censored version of the Internet through universities, secondary schools, post offices and one hundred and fifty (150) socialist oriented, government supervised Youth Computer Clubs.

After the Spanish American War, the foundation for public health, housing, transportation, and telecommunications projects in Cuba was put in place by the  people of the United States. The first telephone company in Cuba was the Cuban American Telephone Company prior to World War I. The first underseas cable between Cuba and the USA was installed by AT&T in 1921. The pace of improvements in telecommunications in Cuba (mostly implemented during 1938 through 1945) abruptly stopped with the 1959 insurrection against Batista and the USA imposed trade embargo institituted in 1962. Land reform, education reform, health reform and nationalization of non-Cuban companies, along with the defense of the new government, took priority. This multi-decade neglect of the Cuban telecommunications’ infrastructure by the Government of Cuba resulted in the infrastructure being in poor working condition and obsolete by 1995. Outdated coaxial cable trunk systems, using an X.25 network, are standard in Cuba. High speed Internet and telecommunications’ services, domestically and those connected to international communities with Cuba, are very limited despite the 1980 Cuban Communist Party Congress authorizing the development of computerized telecommunications. It was not until 1988 that the first real domestic electronic network was operative in Cuba. AT&T, Sprint and MCI began offering direct dialing into Cuba in 1994. The payments of usage tax and royalties to Cuba have been clouded recently by US court decisions following the “Brothers to the Rescue” incident when Cuba jets shot down civilian airplanes over the Florida Straits in 1996.

Cuba has made a large bet on its future Gross National Product earning “hard currency” in fields (biotechnology, medicine, tourism, etc.) that demand “state of the art” telecommunications and connectivity to the Internet. As Cuba tries to diversify its national products and services away from commodity based sectors, principally agriculture, the “Great Possibilities (and realities) of modern Telecommunications in Cuba” are becoming more evident: (1) internationally, by attractive World Wide Web sites (under the .cu domain) being created by savvy, intelligent Cuban webmasters to lure in tourists, foreign investors and to sell Cuban products internationally and (2) domestically, by historic avenues being “dug up” to lay high speed digital lines and cable. Through four major Cuban government controlled networks (CENIAI, CIGBnet, TinoRed, and InfoMed), international connectivity from academic institutions, government owned commercial entities and research facilities appear to be more important to the Government of Cuba than individual citizen access to the Internet. Portability and mobility through wireless networks are becoming more evident in Cuba today through joint ventures Cuba has undertaken with foreign entities. One example is Telefonos Celulares de Cuba (Cubacel), the cellular phone company of Cuba. Cubacel offers products and services in Habana and major tourist areas. In 1991, Cubacel was originally a joint venture between Telecommunicaciones Internacionales de Mexico (TIMSA) and Cuba. Sherritt International, based in Toronto, owns a minority interest in Cubacel.

Ramping up telecommunications in Cuba requires a tremendous amount of capital that socialist Cuba simply does not have. Numerous difficulties face potential joint venture partners with Cuba to modernize telecommunications and the Internet in Cuba. First, the majority of the telephone network in Cuba is pre-1959 vintage. Second, remittances between the USA and Cuba are clouded by recent USA court decrees which have had a chilling effect on potential investors. Finally, the Cuban economy and Cuban peso (which lacks liquid hard currency convertibility) remain fragile despite meager gains made during Cuba’ recovery from the “Special Period” precipitated by the collapse of the USSR. Socialist Cuba, like North Korea, remains a relic of the Cold War. Potential entrants into the Cuban telephone system face three primary obstacles. First, the country cannot receive remittances from its largest long-distance market, the United States. Second, the Cuban peso is not convertible. Finally, the telephone network is inherently the same as prior to the 1959 Revolution. Despite these barriers, where permitted, opportunities abound within strategic initiatives being put in place by the Government of Cuba and funded through joint ventures with foreign domiciled partners.

On April 13, 2009, President Barack Obama sent a memorandum to the Secretaries of State, Commerce and Treasury that would expand and license telecommunications from the USA to Cuba. Specifically, the White House Fact Sheet lists the following actions:

Today, Cuba remains an “emerging nation” when it comes to realizing the full potential of modern telecommunications, data communications and the Internet but the landscape in these areas will improve dramatically within Cuba over the next few years. Per capita Internet access and use (including e-learning) will increase, infrastructure barriers will be removed, network security questions properly addressed and high access charges will be resolved, private citizen use of the Internet will dramatically increase…all of which will lead Cuba's workers, especially entrepreneurs, further into a knowledge economy, e-commerce and Cuba being internationally competitive in the sale of its products and services in global markets. When legally allowed, these goods and services will be marketed through Havana Bay Company ®. 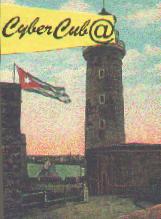